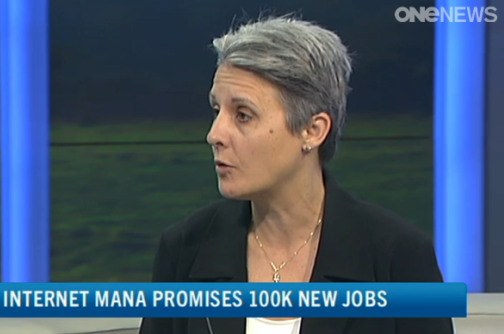 Internet-Mana has launched its election campaign by promising 100,000 new jobs, nationwide full employment and an ambition to turn New Zealand into a “world-leading digital workforce”.

The party’s Right to Work policy outlines a plan to create 50,000 permanent jobs and 50,000 shorter term jobs a year over the next five years, as well as how the party would tackle youth unemployment.

It was launched at Western Springs College in Auckland today in front of a crowd of about 500 people.
The party says creating the jobs would cost $1.3 billion a year and they would spend a further $400 million to develop a digital workforce.

This would be paid for by redirecting a fifth of ACC current reserves as well as the employer and earner ACC levies to a new “social insurance fund”.

In a joint statement, Mana leader Hone Harawira and his Internet Party counterpart Laila Harre said successive governments had failed to grasp the impact of social and economic change on employment and the reliance on traditional primary industries, “market forces economics and disposal of state assets has failed to provide enough jobs”.

“There has been a failure of national vision. Community and industry innovators have been starved of the funding, digital infrastructure and support platform to create new jobs,” the pair said.

“As a result, whole families and communities are unemployed, under-employed or in low-paid, insecure work.”

There was an urgent need to provide meaningful work in communities and “to develop a digital and technology savvy workforce on which our economic future will depend”.

“Internet MANA is promising an explosion of creativity and entrepreneurship at all levels.”

The country’s welfare system could not cope with the “load of joblessness that we carry as a country” and while other parties concentrated on managing an increasing welfare budget “we are fully focused on the solution – jobs”.

The pair said it was widely accepted that ACC reserves and levies were excessive and redirecting some of these would allow them to pay for their policies without increasing taxes.

The ACC funding, combined with money saved through having fewer people on social welfare, would create a fund of $1.7b a year for five years – a total of $8.6b.

“The aim is to fill gaps where the market is not able to create and fund jobs and to create sustainable community-based employment.”

The new jobs would reflect the skills available in the community, aim to tap into the potential of the tribal economy and to address the disparity in unemployment between Maori and non-Maori.

Young people, those who have been unemployed for more than a year, Maori and students over the summer break would be prioritised in the programme which would also include life skills training and drug and alcohol counselling where needed.

Community economic developments could include initiatives such as waste management, Maori creative arts and design, civic maintenance and help in schools, hospitals and retirement villages.

At national level they could target conservation initiatives.

Initiatives to develop the technology workforce would include $5m a year for 500 “ideas grants” to encourage entrepreneurship and a New Zealand Venture Investment Fund Limited (NZVIF) would be set up with seed funding of $25m for a new Social Enterprises Fund.

Community hubs would be set up around New Zealand and ICT apprenticeships would be created.

National’s economic development spokesman Steven Joyce said the announcement was “all part of the battle on the left to try and outspend each other with taxpayers money when we still haven’t got into surplus yet”.

“These Dotcom policies would be massively expensive for NZ – they talk of billions and billions more spending for free tertiary education and now community work schemes – which would have to go on top of the billions already promised by the Greens and Labour. The left’s policies are completely unaffordable and would stall our recovery.”