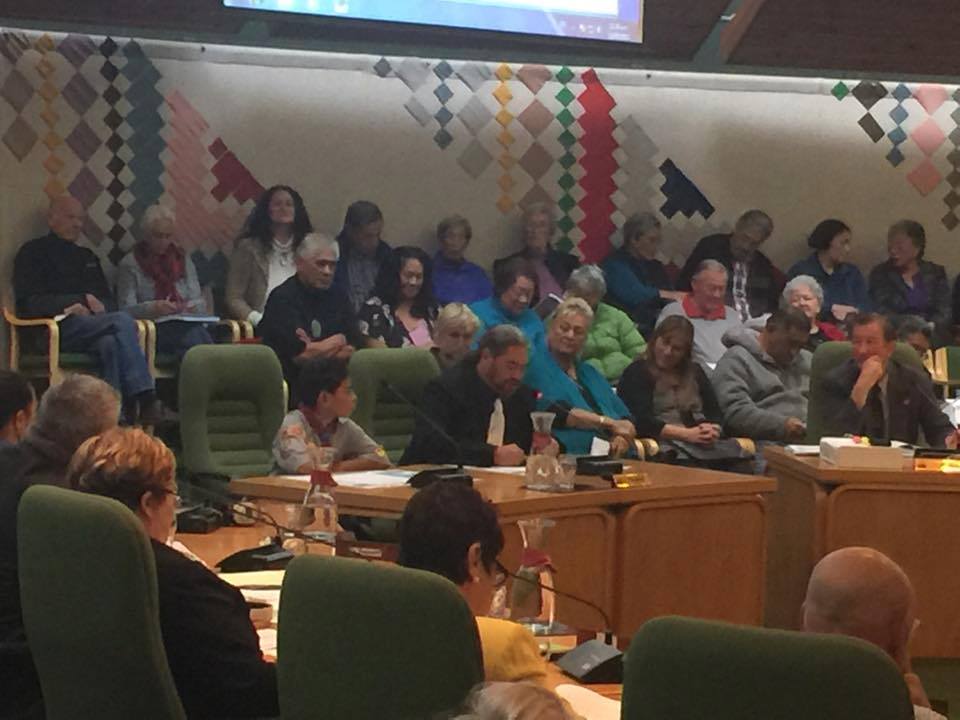 The final day of the submissions was held on Monday, there was passionate debate and while the first few days of submissions saw a strong “pro democracy” push, the final days saw opinion sway away from fear and ignorance and overwhelmingly towards those in support of the Te Arawa Partnership Model.

With almost 2000 submissions and countless petitions, this issue has seen the largest number of submissions received on a single issue. Equally large were those wishing to submit verbally. Almost 200 local residents choose to speak their submissions directly to the Councillors.

IT professional and Masters student, Hemi Bennett spoke to his submission with the tautoko of his 9-year old son (and campaign manager), James.

This is the full-text of what he presented:

Your Excellency the Mayor and Councillors, thank you for this time. I am happy to be here today, in what will hopefully go down in history, as the day New Zealand punched above our weight. To knock out racism and to improve race-relations in our beautiful country.

TODAY IS THE day where history changes. It is a day of reckoning for Maori historically. It is the day you as councillors and people of New Zealand. Will grow up and make this country a free and equal opportunity for all ethnic cultures including the Maori culture.

We watch other ethnic cultures succeed in our country. It is time we can all enjoy financial success in New Zealand. It makes good business sense working in partnership.

The CEO of Air NZ said we need to find something unique for tourism for growth.

[quote_center]The Maori culture is that point-of-difference in tourism. Rotorua is the waharoa o Te Ao Maori, the gateway to the Maori world.[/quote_center]

[quote_center]The decision is yours don’t let race relations go back another 100-years.[/quote_center]

Look what’s happened in Australia, I’m against forced closure of communities. The urban drift, a type of closure has left the provinces in need of jobs, infrastructure.

The drift to the city is happening here.

I am here to encourage council, patriots worldwide to continue to fight for freedom from racial and financial tyranny. You have listened to the controversy, the racist remarks, even apartheid. Racial discrimination and discrimination is still happening on all levels of white-privilege. It was NZ that galvanised the rainbow nation. NZ knocked out apartheid in South Africa, we need to knock that type of racism out here now.

I BELIEVE MIGRANTS respect Maori more than some of the pakeha who have lived here and it has come out in the submissions to-date. Racism is intergenerational and colonisation is institutionalised. A friend from Porangahau said on his 60th, we have the best pakehas in New Zealand. If they have the best pakehas then what pakehas have we got?

What I will say to the most senior members of council. History tells us that people do not learn from history. Let us learn today. Let us learn from the mistakes of the past as we move into the future. Let us not demonstrate in the streets, delay process, use stall tactics or court. Governance is about law reform for a brighter future. The future is now.

As we research smaller and smaller units of matter, it has become clear to some that there is perhaps no final unit waiting to be discovered but a fundamental unity to everything.

1 thought on ““Racism is intergenerational and colonisation is institutionalised” #ArawaPartnership”