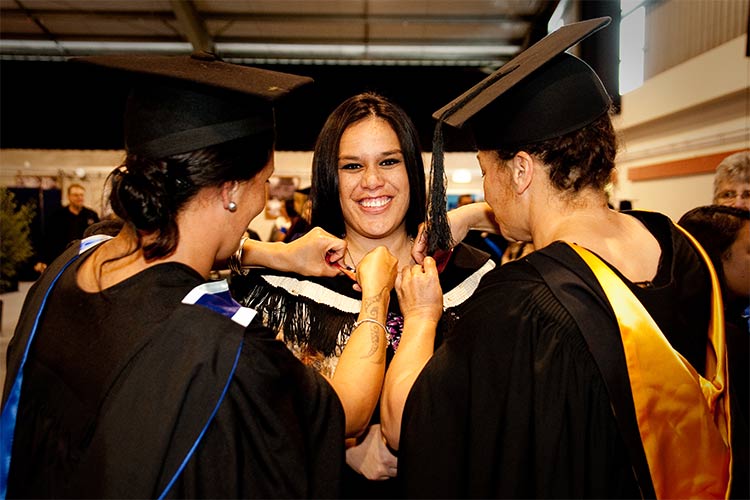 A Māori archaeologist says the number of tāngata whenua doing social and cultural bachelor degrees is rising due to a desire to challenge the status quo.

Statistics New Zealand data showed more Māori are getting bachelor’s degrees and pursuing arts courses than in any other field of study.

The data shows just over 27,000 tāngata whenua got the level seven qualification in 2013.

It also found that nearly 7,500 of them chose to study social and cultural degrees, including political science, archaeology, Māori customs and social work.[/quote_center]

She said tangata whenua were questioning the dominant westernised view of the world and want to know more about their own identity.

[quote_center]They’re starting to challenge the status quo in an art’s degree arena. That’s challenging the assumptions and some of the domination of all Pākehā content.[/quote_center]

“So they’re challenging some of those academic assumptions about ancestral Māori and looking to take a more Māori-centric view, or at least introduce that into some of these areas.”

Ms Rika-Heke said Māori insights were a valuable contribution to the arts field.

“For example, you’ll see a lot of the archaeology content now being taught in other institutions but under indigenous studies or in some parts in Te Kete Aronui classes under Māori studies, so you see that natural flow on affinity.”

A senior lecturer at Victoria University in Wellington, Maria Bargh, said the dynamics of her class of about 45 students has changed.

“I’ve been teaching a Māori politics course for about ten years, and, in that time, when I first started teaching, most of the students that came through the political science department were Pākehā.

“But, in the last couple of years and particularly last year, the majority of the students coming through the politics department [are] actually Māori.”

Dr Jessica Hutchings, who is the Kaupapa Māori unit manager at the Council of Education Research, is excited by the growing numbers, but said tāngata whenua needed to move beyond their comfort zone and branch out.

[quote_center]“We need to look at it right across the board if we’re wanting to see Māori participation increase beyond arts and society…. what are the things that we need to do in the science and engineering, in medicine, dentistry, physical education and those other disciplines to see those types of increases?”[/quote_center]

Reremoana Theodore is a co-investigator on a longitudinal study at the University of Otago.

She is tracking graduates study choices, including for Māori, and said more detailed information was needed.

She said it will help different groups to provide better outcomes for tangata whenua.

“The Universities themselves are interested in obviously the overall findings but also our findings from Māori graduates.

“We have interest from policy makers and from groups such as Careers New Zealand and that interest is looking at where, for example, our Māori graduates are going in terms of where they’re working [and] what type of employment.”

The data from Statistics New Zealand shows very few tāngata whenua did a degree in areas such as hospitality.