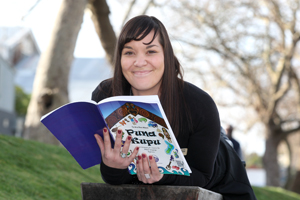 Wanganui woman Te Rina Perry is learning more than Maori words in her te reo Maori classes at Te Wananga o Aotearoa. Te Rina, who is of Ngati Porou descent, has been taking te reo classes for about six months and said learning her language is also teaching her about her culture. “It’s definitely not just the language – when you learn [to speak] Maori you are learning about the culture that goes with it.”

Having children was the push Te Rina needed to sign up for the wananga’s free te reo classes. “I thought it was about time I learned my own language so I can pass it on to my kids.”

Te Rina said she loves her three-hour classes on Tuesday nights. “There’s a real mixture of ages, and there’s a mixture of Maori and Pakeha and even one woman who is Canadian.

“It’s harder than I thought it would be – well, some things are.” She said the classes were not like “sitting in a classroom at school”. Although there are a few written assignments to be completed, most of the learning is done through games and other interactive activities. She said her family was very supportive of her decision to learn te reo.

Her grandmother is the only member of her immediate family that knows her own language. “She’s a fluent speaker and she thinks it’s fantastic that I’m learning.” Te Rina said she would recommend other Maori people who don’t know te reo to sign up for classes. “I’ve only been learning about six months, but already I can have a basic conversation in Maori.”