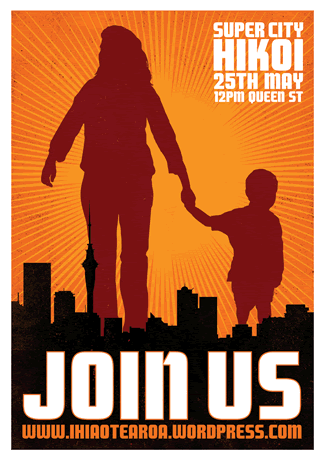 Tariana Turia has expressed disappointment at Rodney Hide (leader of the Act Party) threat to resign as local government minister if the government includes Māori seats in the Auckland super-city council.

TV3 reported that “Hide says special seats would be against his principles. Meanwhile, United Future leader Peter Dunne also opposes separate Māori seats – saying New Zealand shouldn’t become divided into a series of mini-nations. A select committee’s due to report back to parliament in a fortnight with recommendations for the role Māori will play in the super-city.”

On May 25, 2009, people from all over the country came to tautoko Auckland in their fight to protest against the dropping of Maori seats from the Auckland super city proposal, at.

A Royal Commission proposal suggested having 3 Maori seats on a 23-member council, two elected and one appointed by local iwi but was rejected by the Government in favour of instead having only 20 councillors, none directly Māori-elected. Over 10,000 protesters marched from various locations around the city converging at the bottom of Queen Street and walking up to Aotea Square.