Ngapuhi living in Wellington, the Hutt Valley and Porirua are invited to a hui at Massey University’s Kuratini Marae to give their views on moving ahead with a Treaty Settlement. 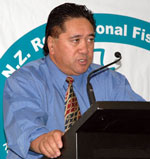 Ngapuhi is by far the biggest iwi, with a large number living in the Wellington, Hutt and Porirua rohe.  This hui will be an important guide for Ngapuhi rangatira.

Ngapuhi leader Sonny Tau said they want to hear from Ngapuhi about what they want for their tamariki and mokopuna.

“We particularly want ideas and feedback about who Ngapuhi whanui trust and have confidence in to represent them – hold mandate – to settle Crown breaches against Te Tiriti o Waitangi.

“There are some 300 Ngapuhi hapu, so the numbers are large. The 2006 Census had 122,214 affiliating to Ngapuhi, which is almost 20 percent of Maoridom. So Ngapuhi is big, and growing fast.

“This journey began in 1835 when Ngapuhi rangatira signed He Whakaputanga o te Rangatiratanga o Niu Tireni and Te Tiriti o Waitangi. Breaches occurred almost immediately, and our tupuna have been making claims against the Crown since that time. We are certain that the next few years must bring these grievances to an end, with a new era of growth and prosperity dawning for Ngapuhi.

“We want to hear what Ngapuhi living in Wellington, the Hutt and Porirua think, and we welcome all to this hui.”