In what looks to be a significant development, word is that the United States will review it’s opposition to the UN Declaration on the Rights of Indigenous Peoples. This follows on from New Zealand’s change of heart (no doubt a result of the efforts of the Maori Party) which saw Dr Pita Sharples travel to New York to sign on behalf of the government.

Reuters is reporting that the move announced by Washington’s U.N. Ambassador Susan Rice, came one day after New Zealand said it was reversing its stance and now supported the declaration passed by a large majority in the General Assembly in September 2007. 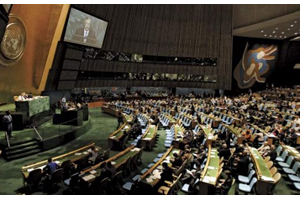 The United States, Canada, Australia and New Zealand — all with sizable indigenous populations — were the only countries to vote against the declaration when it was adopted. Following a change of government, Australia said last year it had decided to back the text.

The declaration says indigenous peoples “have the right to the lands, territories and resources which they have traditionally owned, occupied, or otherwise used and acquired.” Opponents said the phraseology went too far and threatened legal chaos over property rights.

U.S. officials said at the time — when the Bush administration was in office — that the text was unclear and that those who drafted it had failed to seek consensus.

But, addressing a U.N. forum on indigenous peoples on Tuesday, Rice said she was “pleased to announce that the United States has decided to review our position” on the document.

“We recognize that, for many around the world, this declaration provides a framework for addressing indigenous issues,” she said, noting that Native American leaders had encouraged President Barack Obama to re-examine the U.S. stance.

“As we move ahead, we look forward to consulting extensively with our valued and experienced colleagues in the federally recognized Indian tribes and interested non-governmental organizations,” Rice said.

Obama told Native American leaders in November that they would “not be forgotten” and vowed to end U.S. government neglect and broken promises toward Indian tribes, of which there are more than 500 in the United States.

The U.N. declaration potentially puts in question much of the land ownership in countries, such as those that opposed it, whose present population is largely descended from settlers who took over territory from previous inhabitants.

In announcing on Monday that New Zealand was reversing its position, Maori Affairs Minister Pita Sharples made clear the support was subject to his country’s law taking precedence.

National legal and constitutional frameworks, he said, “define the bounds of New Zealand’s engagement with the aspirational elements of the declaration.”

The U.S. move on indigenous rights was the latest shift by the Obama administration away from its predecessor’s diffidence toward U.N. pacts. Last July, the United States signed a U.N. convention on disabilities that the previous administration had refused to endorse.

2 thoughts on “U.S. to review stance on UN Declaration on the Rights of Indigenous Peoples”