Skip to content
In his traditional Christmas message delivered Saturday to crowds braving winter’s chill, Pope Benedict XVI urged peace in the Middle East and asked for God’s comfort upon beleaguered Christian communities in Iraq and elsewhere in the region.

The annual “To the City and the World address, known in Latin as “Urbi et Orbi,” mentioned other global hot spots. 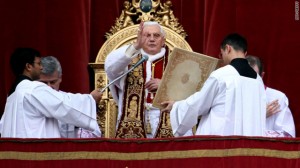 The pope wished for security in places overcome by conflict like Somalia, Sudan’s Darfur region, Ivory Coast, Afghanistan and the Korean peninsula and those nations like Haiti that are grappling with the consequences of disease and natural disaster.

“May the light of Christmas shine forth anew in the Land where Jesus was born, and inspire Israelis and Palestinians to strive for a just and peaceful coexistence,”

The 83-year-old pope suffers from Parkinson’s disease, as well as hip and knee ailments that make it practically impossible for him to walk or stand. He also has difficulty speaking, yet he delivered his remarks in their entirety and also offered his traditional Christmas Day greetings in some 62 languages, including Maori, Aramaic, Arabic, Hebrew, Hindi and Swahili.