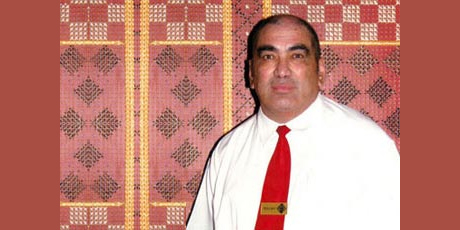 We recently passed on a story about organ donation and how Maori are increasingly choosing to give this profound gift of life. After visiting the www.donor.co.nz website we came across the story of this tane, have a read and tell us what you think:

When Wiremu Keepa had a car accident in 2000, he thought that was the biggest of his worries. Little did he know the following doctor’s check would reveal an inherited heart condition.

“I used to black out but I didn’t think it was that serious. But when the doctor heard an abnormal rhythm and asked if I had any family history of heart problems – I do on both sides – it all made sense,” he says.

A series of appointment, tests and consultations followed and Wiremu was told he was a candidate for a heart transplant.

“I wasn’t afraid. Really I thought I was one of the lucky ones. The doctors had discovered the illness quickly and I was a suitable candidate. I wasn’t at death’s door. I was still reffing rugby and still studying. I was tired but I just thought it was a lack of sleep.”

The fact that he was able to lead a relatively normal life meant Wiremu wasn’t on the active transplant list, he was on a slower waiting list. This went on for three years until his health did start to deteriorate.

“I had to rearrange my study for only morning classes because I was just too tired to do anything after 12 o’clock. My colouring was off and I just wasn’t well.”

“I was having regular 6 month check ups and after the last one, they rang me to say I was being transferred to the active list and three weeks later I got a call asking me to head up to Greenlane the next afternoon.”

“I thought it was just another check up so I didn’t kiss my sons goodbye or say goodbye to my family. When I got to Greenlane, the nurse asked me to have a shower which I thought was a bit odd just to see the doctor. Then when she asked if I needed help to shave my chest I asked what was going on. She said I was having the operation right then.”

Six hours of surgery and three months of recuperation followed. Wiremu says advice given to him by a heart recipient while he was on the waiting list to keep fit was the key to his quick recovery.

“I’m not going to do a Jonah Lomu but I don’t drink and I don’t smoke. I look after myself,” he says.

And he keeps fit. One year to the day after receiving his new heart, Wiremu completed a 10km walk in the Fletcher Challenge Marathon.

Unlike many organ recipients, Wiremu has met the family of his donor. Newspaper publicity around his transplant was spotted by the donor’s wife who put two and two together and made contact.

“I met her at the thanksgiving church service they hold each year in Auckland for donor families and recipients. She touched my face to try and feel her husband through me. We hugged and she had a little cry,” he said.

They are still in touch and Wiremu sends her copies of his check up x-rays so she can see her husband’s heart beating strongly.

He can never thank the wife of his donor enough and says he is just so grateful that she and her husband had spoken about organ donation and knew each other’s wishes.

Wiremu speaks about his experience to Maori health organisations and believes education is the key to securing more donors.

Wiremu also says letting potential recipients know that they can take their removed organs home with them to bury is one message which is especially important for Maori.

“I tell them they can take their organs home with them like I did. Organ donation does not necessarily mean you can’t be buried whole I lost my mother last year and I buried my heart with her. It’s her heart.”