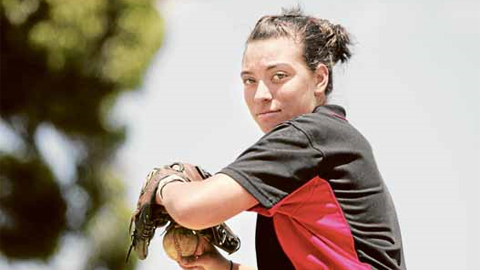 The Moanaroa whanau have touched all the bases in their careers, from being contracted to the Boston Red Sox to now playing out of Blacktown Olympic Park with the Sydney Blue Sox in the Australian Baseball League.

So they didn’t need to pitch the game up much to Pani Moanaroa Taylor.

“My cousins got me into it,” she said.

“I started playing at seven or eight.”

She’s been playing with the big boys ever since with Blacktown Workers.

Except latterly with Baulkham Hills A grade, as she switch hits every Saturday from mixed Workers to women only.

Given her experience with the boys, it’s no shock she’s now mixed it successfully with the big girls.

“I went to the trials, slogged it out and made the cut,” she matter-of-facted about selection in the NSW senior team for the Australian titles in Canberra in April.

But it isn’t matter of fact.

At just 16, the pitcher has achieved a few things.

She’s the first female of Maori descent to make the team.

She’s the first female from Blacktown Workers to make a senior representative team.

The family connection has caused her father and keen golfer Steve to be, well, a keen worker for Blacktown Workers and women’s baseball.

“We have some good young girls coming through our system and are looking to field a women’s A grade team through Blacktown Workers in the near future,” he said.

That means showing baseball is not boys only.

Pani has proved the point already.

The Sydney Blue Sox will have more than a point to prove against the Adelaide Bite at Blacktown Olympic Park on Friday night.

They will be playing for their Australian Baseball League lives after the regular competition rounds that promised so much.

The Blue Sox had finished top of the league, earning the home-ground advantage against the Perth Heat in their first week of the final series.

Perth lived up to their name, running hot and beating off their Sydney hosts.

They won both games, 4-2 and 6-0 respectively. Perth have earned home-field advantage for the best-of-three series that will decide the league, and that will be played on the February 11, 12 and 13.

The Sox will meet the Bite at 7.30pm on Friday and Saturday and they will play again on Sunday if a decider is needed.