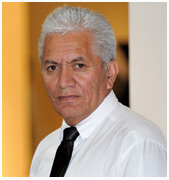 High profile Maori leader and a recognised authority on cultural/eco tourism, Te Taru White, has been engaged as the Consultant for the development of a major cultural centre at the Port of Prince Rupert in British Columbia.

A partnership has been forged between the Port Authorities and the nine Allied Tsimshian tribes of Lax Kw’alaams and Metlakatla to develop the centre which will showcase the best of Tsimshian culture.

To ensure community ownership and participation, Mr White spent the past 3 weeks working with the Project Team and meeting with the communities and key stakeholders to inform them of the proposed developments and to present a draft concept statement prepared by the Project team.

“It is important that a concept which defines the purpose and expected outcomes of the proposed pavilion is agreed and owned by key stakeholders. This then informs the study and ensures appropriate alignment” he said. “Too often Architects and Designers take control of this aspect with a result that bricks and mortar becomes the focus rather than people, functionality and visitor experience” he said.Full support was expressed for the project which will proceed towards concept design and business case. All going well, it is expected that a Centre could be built and operational by early 2013.

Mr White will continue as the Principal Consultant on the project following his expected return to Prince Rupert in mid March to lead some interim solutions for the Project and to help design and facilitate the way forward. “This is an exciting time for the Tsimshian Allied tribes and the people of Prince Rupert” he said.

In a media statement released on 14 February, CEO of the Prince Rupert Port Authority, Don Krusel said ” the Coastal Tsimshian culture is a unique point of difference for Prince Rupert and it makes sense to develop and profile this for the benefit of the community at large” he said.

Elected Chiefs of the Lax Kw’alaams and Metlakatla communities agreed and commented that “the pavilion could provide a valuable education facility not only for the visitors to Prince Rupert but for their own people. It could highlight the uniqueness of our Coastal Tsimshian arts, crafts and culture and provide an important conduit to other opportunities in Prince Rupert” they said.

Mr White was also a keynote speaker at a Aboriginal tourism Northeast British Columbia’s conference in Fort St John on 26 January where he presented his experience in cultural tourism development in New Zealand. He also led sessions on future opportunities for the First Nations communities of Fort St John.

Mr White is an ardent supporter of self determined development having worked on related issues with his good friend Calvin Helin author of the best seller “Dances with Dependency” and “the Economic Dependency Trap” over the past 15 years. He views culture as a key component of this development. “Too often we immerse ourselves in the commercial world but we need to come up for air and ask ourselves the cultural question – how much do we value our culture?” he says. “Culture and commerce can live together and hopefully through a considered approach to the cultural centre in Prince Rupert we can make this happen for the Allied Tribes of the Tsimshian Nation” he said.

Mr White brings his considerable experience as the past co-leader of the National Museum of New Zealand, Te Papa Tongarewa and more recently, the CEO of the New Zealand Maori Arts and Crafts Institute, Te Puia to the endeavours in Prince Rupert. Mr. White has also been been a leader and an instigator of constructive change in social, cultural and economic issues in his country and is a highly regarded international speaker.

He has established his own consulting company Te Taru White Consultancy Limited and can provide expertise on conceptualising, designing, building and implementing cultural tourism businesses in a pragmatic and cost effective manner. He understands the value of authenticity and authority around cultural knowledge and product and believes that culture and commerce must sit comfortably together .

“If you get the culture right, commerce will follow” he says.