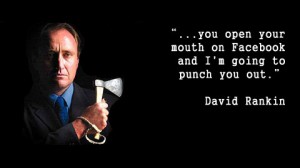 Mr Rankin has complained about employee Marama Davidson over a series of online posts – the latest of which allegedly included the word “pokokohua”.

The term puts someone’s head in the same category as food and is hugely insulting.

He alleges that over the past six months Ms Davidson has attacked him for his views which have included criticising Te Tii Marae for charging journalists at Waitangi and calling the hikoi to Parliament over the latest foreshore legislation an “embarrassment” to Maori.

“Considered cumulatively, I believe her comments amount to hate speech. In the latest example … she wrote on TangataWhenua.com: ‘David Rankin – pokokohua! I can’t wait to tell him to his face!”‘

Mr Rankin alleges Ms Davidson has also used Facebook during work hours to air her views about him.

The complaint was lodged with chief commissioner Rosslyn Noonan.

Mr Rankin draws the ire of some in Maoridom. He is outspoken and variously annoys Maori politicians, journalists and the intelligentsia who say he has no credibility but has mastered the art of the press release.

He also employed a few of his own swear words to criticise Ms Davidson – saying she had a problem with free thinkers who didn’t toe a “born again” Maori line.

He had considered hiring a lawyer to start a defamation case. “If you’re promoting yourself as part of the Human Rights Commission you do not say to a Maori ‘go boil your head’.

“She’s been going at me for six months, every time I open my mouth. Sometimes, these arseholes need to know, you open your mouth on Facebook and I’m going to punch you out.

Response to Rankin’s comments via Facebook have been quick and all supportive of Ms Davidson, one commenter saying

“I can’t believe this. She hasn’t been “going” at him for six months at all. She’s been responding to his very public comments which, quite often, are sad-sack controversial, not very well articulated and clearly ill-thought out. This see…ms to be entirely selective as well and designed to inflict maximum damage, and upset an incredibly decent person. The violence in Rankin’s response is shameful and embarrassing. As someone often described by the media as a Ngapuhi “leader”, I beg to differ. Anyone that speaks with such vitriole and violence is not fit to lay claim to the title of “leader”.”

In addition there has been a great deal of concern regarding Rankin’s threats of violence against this woman and mother.

“They feel tough behind a computer screen, but they’re too frightened to say it to my face.

“We purport aroha and manaakitanga [love and care] but if someone puts a different point of view they want to kill ya.

Commission spokesman Gilbert Wong said an investigation was under way and would be complete before next Friday.

Part of the investigation would include determining if the comments were made during work hours.

A term which puts someone’s head on the same level as food. It is considered extremely insulting.