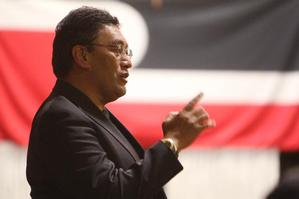 Independent MP Hone Harawira made a key strategic move today by announcing that he is transferring his vote from the Maori Party to the Green Party. Part of the “separation” agreement he and the Maori Party had was that in his absence from the house that the party would cast his vote.

In the statement released today he said,

“Having spoken with the Greens I am happy to say that we have reached an agreement whereby they cast my votes and ask any questions that have been allocated to me, when I am unable to be in the house.

What this means is that Hone won’t need to be in the house for every vote on every reading of every bill, amendment and motion and in his absence the Greens will cast his vote.

In addition Hone announced that a top research unit has agreed to support him by providing analysis of all issues coming before the house so that he is able to “maintain the independent position that Maori people tell me they are no longer getting from the Maori Party”.

Both these developments mean that Hone can continue to spend more time in his electorate, and respond to requests to attend meetings around the country to talk about his political future and the possibility of new party.

A special meeting will be held at 12pm Saturday 30 April 2011 at Mahurehure Marae in Point Chevalier in Auckland.