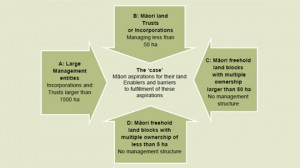 The two reports by the Ministry of Agriculture and Te Puni Kokiri say that there are several barriers to Maori land development, including complex governance and management structures, as well as a lack of business knowledge and skills.

The reports found that 80% – or 1.2 million hectares – of Maori freehold land is under-performing or under-used.

An organic beef farmer in the Far North, Iwipuihi Tipene, who also chairs a Maori Organic Group, says Maori could potentially be the silent giants of the New Zealand economy.

But Mr Tipene says the reports are accurate in stating that it is not easy for Maori to do this, with hindrances including regulations and a lack of information about market access.

Iwipuihi Tipene says Maori have also received bad advice in the past on developing their properties.

The head of a Maori farming trust in the central North Island says the reports might be the push Maori need to unlock their agribusiness potential.

Waipapa 9 Trust chair, Dawson Haa, says while cash-flow and skill are the biggest obstacles to Maori land development, outside criticism might just get Maori to act.

Mr Haa says he hopes that any Government support for Maori agribusiness will be long term to ensure its success.

The reports suggest a review of the current regulatory environment for Maori-land ownership groups, and also training and development programmes for those overseeing Maori entities.