(Stuff) The death of a well-known vagrant has resulted in an outpouring of generosity from Wellingtonians.

Ben Hana, better known as Blanket Man, died in Wellington Hospital on Sunday afternoon. The hospital has not released details of the cause of death. 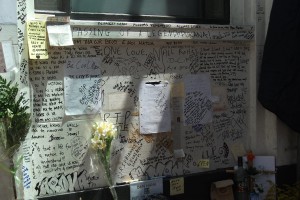 Yesterday, Wellington businessman Gareth Morgan offered to pay for the funeral, a gesture gratefully accepted by the family.

Daughter Renee Temaari said on Monday her 54-year-old father had left no money for funeral costs and the family did not know how they would pay for it.

Yesterday, Dr Morgan confirmed he would pay for the ceremony, which would be planned by Mr Hana’s family.

“It’s just a question of what the family’s wishes are,” he said.

“He [Mr Hana] has been a part of the culture for so long we owe that to him at least.”

Miss Temaari said the family was to meet a funeral director to plan the private ceremony and was also planning a public service. “People need the chance to say goodbye.”

She was overwhelmed with the support the family had received from the public after her father’s death.

“Oh my god. I’m about to cry, it’s just awesome, there’s not even a word for it.

“We have found it quite overwhelming to go through this, especially with who he was. But getting everyone’s help has just been amazing.”

A coffin was donated by Tender Rest in Petone, she said.

Dr Morgan, who is a part-owner of the Wellington Phoenix, said he had no idea what a funeral service cost, but he was prepared to foot the bill for Mr Hana’s family. “I don’t know what a funeral costs, I’ve got no idea. Do you? I can’t imagine it’s too much. They [the family] obviously haven’t got the means to do it by the sounds of it … so I’ll do that.”

Dr Morgan said his dealings with Mr Hana were limited, but felt he deserved a proper funeral.

“I live not too far from Courtenay Place so I walk through there a lot and I see him a lot and I talk to him a lot … I felt sad for him really, because I don’t think he was in control [of his life] in a lot of ways.

“[However] he’s a Wellingtonian like the rest of us isn’t he? We’re all one community.”