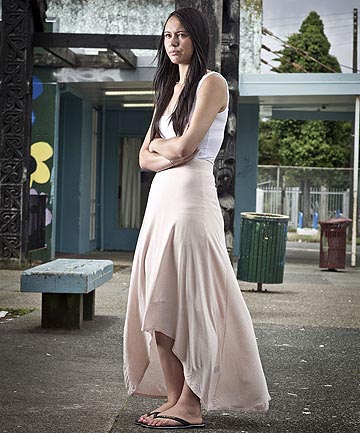 azmine Heka is becoming a bit of a celebrity in her hometown of Whangarei. On Tuesday she was handing out copies of her petition at the shops in Otangarei, one of the city’s most deprived areas, when a mother of seven came up to her. She had seen Jazmine on the front page of the local community paper that day.

“I think it’s amazing what you’re doing,” said Jacqui, who did not want to give her last name. “A lot of our people are disheartened, they’ve given up. The standard of living of people in New Zealand is shocking, people are struggling. It’s something the government needed to address a long time ago.”

Jazmine, who is 16, can relate to what she is saying. She used to live in a state house in this very suburb – a house that was so damp and cold she developed respiratory problems. And although she always had food on her table, some of the neighbourhood kids did not.

“Some of my friends went to school hungry,” Jazmine says. “I can relate when children say how they live – in my heart I understand.”

It is this connection, plus Jazmine’s age, the fact that she is bright, articulate and beautiful, that is making hers such a powerful voice in the campaign to stamp out child poverty. When she speaks, people listen.

“We’ve been on the bandwagon for ages trying to think of ways to make people sit up and take notice,” says Ngaire Rae, a health promotion adviser with Manaia Health and convener of the Whangarei Child Poverty Action Group.

“You get disheartened – it’s really important, why aren’t people paying attention? Then a young person like Jazmine comes along, they are usually so self- absorbed, and you realise there is real potential here. It’s refreshing that a young person believes this is worthy. It’s inspirational, it gives you hope.”

Jazmine’s metamorphosis from schoolgirl to activist began in late November, just before the election, when TV3 screened the documentary Inside Child Poverty.

Produced and presented by Bryan Bruce, it examined the effect free market policies have had on the health of low-income children and showed how damp, overcrowded housing is causing illnesses like rheumatic fever. Bruce also travelled to Sweden, and found that it puts a greater emphasis on preventative health and provides free after-hours healthcare and free lunches in schools for all children.

Jazmine missed the programme, as she had already gone to bed.

“Mum said ‘you have to watch this documentary’. I went online and watched it, I was swearing throughout it. At the end I was a bit sad and angry, and was disgusted in my own country.

“I was angry that the government could actually let children live like this. Mum was like, ‘Jaz, you can do something about this’. I said, ‘No I can’t, I’m 16.’ She said ‘What are you going to do about it?’ She kind of challenged me. I didn’t think I could do it at first, I’m a child and what can children do, really? But then I thought, ‘No, I can do this.’ ”

Jazmine rang TV3 and got an email address for Bruce, writing to him saying she wanted to start a petition and what did he think? Bruce provided some pointers, and Jazmine took it from there.

She contacted the clerk of the House at parliament, and started a petition, calling for free healthcare for all children whenever they need it, free healthy school lunches for all children and a warrant of fitness for all rental houses. She also drew up a Children’s Charter, and started a Facebook page, Children Against Poverty. “That was easy, I’m always on Facebook.”

A few days before Christmas, she launched her movement at a public meeting at the Manaia Health Centre, where Bruce screened his documentary.

“She filled the room with some of the most influential people in the north,” Bruce says. “Part of the reason I think is not only was it Jazmine and the attraction of a young person putting a voice to children’s issues, but also the north is doing it really, really hard at the moment. These poverty issues are twice in the north what they are in the rest of the country. I don’t know who said it . . . but Northland is a man-made disaster in the same way that Christchurch is a natural disaster.”

Clair Mills, the medical officer of health for Northland, says the region has some shocking housing, with issues not only around cold and damp but sanitation and water. “We certainly have high rates of preventable illnesses like rheumatic fever, which really should be a developing country disease.”

The government is calling for submissions on a green paper on vulnerable children, but Mills says the problem with the paper is that it mentions poverty once and ignores the big issues of why children are “vulnerable” in the first place.

“I think it’s impossible to talk about the vulnerability of children without talking about their families and the situations in which they live. The paper really sidelines some of the major issues facing our children today and focuses on issues like whether we should have compulsory reporting of abuse. To me that’s the tip of the iceberg.”

Mills says the issues Jazmine is raising go more to the heart of the matter.

Jazmine plans to attend Waitangi celebrations next month, and will approach as many politicians from across the spectrum as she can. She does not want to take sides.

“I don’t want it to be political at all, I want people to put their differences aside and understand that some children are really suffering. I think [politicians] are going around the issue instead of going straight for it and tackling it. They are all talking about it, but not doing anything.”

JAZMINE WAS born in Auckland in 1995 and is the middle of Rocky and Catherine Heka’s three children. The family moved to the Far North, and Jazmine was seven when they relocated to Whangarei for work. She likes kickboxing, and enjoys history and English at Whangarei Girls’ High. She wants to go to university and become a lawyer.

The documentary stirred something in her, and her family says she hasn’t been the same since.

“She’s always been driven and has always been a caring person, but ever since that documentary she’s got this fire in her eyes, she’s a changed girl,” says Rocky Heka.

He says the family is doing well now, but things were tough when they lived in the state house in Otangarei.

“It wasn’t very nice, it was damp, mouldy, cold – you could feel the wind coming through the whole house and that was with the doors and windows closed. It’s ridiculous living like that. But we managed to get away from there. You’ve got to pick yourself up, you can’t dwell on waiting around for this and that, you’ve just got to get out there and do it, eh?”

He worries that his daughter might have bitten off more than she can chew.

“I’m supportive of her, but I don’t think she realises just how big this poverty issue is. Is it healthy for her? I don’t know. Should she be at the beach rather than worrying about this? But it’s something she wants to do and I’m not going to stop her.”

Jazmine is naturally shy, and sometimes when she talks she loses her thread and defaults to nervous laughter. But she soon gets back on message, and she is improving at public speaking.

“I think if I keep doing things out of my comfort zone, I won’t be shy. This whole poverty thing has made me really confident and determined for children.”

She wants to create a nationwide movement, but says it’s tough motivating her contemporaries.

“It’s hard to find people my age who want to help and make a change. My friends are not really interested, they’re more into parties and stuff like that. It would be more powerful if we had more children helping.”

Jazmine has collected about 1500 signatures, and 465 people “like” her Facebook page. She has had the odd negative comment in the street, usually involving criticism of parents.

“Parents have some kind of responsibility but the government does too. People are stressing out because times are difficult, they don’t have enough money.”

She wants to collect a “huge” number of signatures, so her petition will be taken seriously.

She is confident that parliament will enact the necessary legislation. “I just need to believe it can be done, and with huge support I think it can be done.”

New Zealand is blessed in so many ways, she says, but too many children are suffering.

“Twenty-two per cent of kids in New Zealand live in poverty. I find it disgusting, it’s not right. We’re so rich in food, we have the resources to be able to care for our children. Every child deserves basic needs – food, a safe environment to live in, medical care.”

Jacqui, the mother from Otangarei, believes Jazmine will get results.

“If adults say it they think we’re just complaining, or it’s our own inadequacies. Her voice will get through, that’s the cool thing.”

To contact Jazmine, email [email protected] or write to her at PO Box 585, Whangarei 0140.