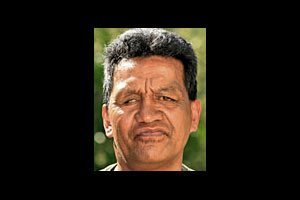 While family and friends know him by his Maori name, Mangu Awarau, it was from English with a touch of French that the parents of the former boilermaker/welder chose his name.

The 57-year-old father of eight now lives in Waimanoni, north of Kaitaia, where he grows organic kumara and peruperu.

He was bemused to read comments by National Party leader Don Brash questioning whether Maori remain a distinct indigenous group because there are few if any full blooded ones.

“So he thinks I belong in a museum?”

On the day of the interview, the Ngaitakoto hapu member is in Auckland awaiting surgery for the cancer which has ravaged his body for six years.

He is one of 15 children. Seven boys and a three girls still survive.

While their unblemished Maori heritage was known in the Waimanoni community, it made little difference to how they were treated.

“We were ordinary Maori like everyone else in our neighbourhood. It’s still the same now.

I don’t look at them and think they are quarter-caste or half-caste. They are whanaunga [relatives], just like me. I don’t think I am anything special. If Don Brash thinks I am special, good for him.”

As a child he was desperate to be known by his Pakeha name, at a time when being Maori meant you were nothing.

He railed at the name Mangumangutaipo (since shortened to Mangu), loosely translated as “black demon”, given by an uncle, Kana Rivers, a Maori battalion veteran.

“He took one look at me when my mum bought me home from the hospital, and called me Mangumangutaipo. That was my name for years.”

The name Patrick, came from Patricia Welsh, a friend of his mother, and a nurse at Kaitaia hospital where he was born. His middle name Fonce was taken from the surname of a French matron who assisted during his birth.

Rivers, was a translation of Awarau, meaning many rivers, the name of his great great grandfather, Rawiri Awarau, a Ngaitakoto chief, and signatory to the treaty of Waitangi.

Anglican missionaries suggested the European name when the chief was baptised.

“The missionaries needed to have some kind of name they could relate to, as they did in those days, the name Rivers came about,” Mr Rivers says.

Educated at Paparore native school, he is fluent in Maori, and English.

Being Maori has little to do with blood purity, he says. It is determined by whakapapa, and upbringing.

“I have a nephew and niece who have blond hair, blue eyes, some who are half-Samoan, some Dalmatian. They are Maori, and they are whanau.”

“I feel pretty rapt to be a Maori. We are a people. We have genealogy links, we have tikunga, certain ways and ideologies.”

He has travelled the gambit of what it means to be Maori, from the days when being Maori was considered second class – inferior.

A situation he believes has changed, to now where the culture is now embraced, its uniqueness celebrated by most Maori and many non-Maori.

“I went to Aussie in the 70’s. Everyone there knew me as Pat Rivers.”

While he enjoyed his life in Australia, he yearned for the familiarity of home and returned in the late 70s.

“When I came back to New Zealand in the late 70s it had become cool to be Maori.

“They said we have had enough of these baldheads hassling us. We are Maori, we will use our real names. They said, what’s your real name? I said my name is Mangu – Mangu Awarau.”

A name that he has been known by, and accepted ever since.

Whether there continue to be full-blooded Maori in this country, is irrelevant, he says, Maori will forever retain their identity and customs.