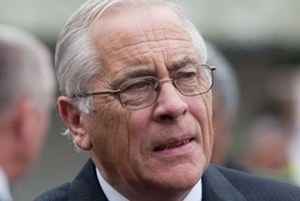 Former cabinet minister Sir Douglas Graham should be stripped of his knighthood after being found guilty of making false statements, a Lombard Finance investor says.

TW.com – this also may mean that he will not be able to sit on any boards. Sir Douglas Graham was National’s Minister of Treaty Negotiations and the architect of the controversial Fiscal Envelope during the 1990s.

Paul Wah was in the High Court at Wellington today to see Graham and Bill Jeffries (also a former cabinet minister), and two other former Lombard Finance directors, be found guilty of four charges of making false statements.

The verdicts also included one set of not guilty verdicts for Graham, Jeffries, Lawrence Bryant and Michael Reeves. They were allowed bail without conditions.

Sir Douglas was visibly shaken and some members of the men’s family were in tears after the hearing.

The charges they were found guilty of were:

Count one: Between December 24 2007 and April 3 2008 Authorised Reeves to sign on behalf of the defendants a registered prospectus that was distributed and included an untrue statement. The amended prospectus omitted significant adverse liquidity issues, including the company’s deteriorating cash position since September 30 2007.

The charges carry a maximum penalty of five years’ imprisonment or fines of up to $300,000. A community-based sentence is also an option.

Lombard Finance was put into receivership in April 2008, owing $125 million to 4400 investors. Secured creditors were expected to be repaid less than 24 cents in the dollar.

‘NO JUSTICE FOR INVESTORS’

Wah said the only justice for investors would come in the fall from grace of the high profile directors.

“Essentially for the investors there is no justice. What we want is compensation, and that will come if a class action is mounted as a result of these convictions.”

Wah said he wanted to see the accused surrender their assets to compensate investors.

“That would partly alleviate the distress [that] a lot of the older investors have had to endure.”

Wah said Douglas should lose his knighthood. “It should be gone by lunch time.”

He said he invested in Lombard Finance because Sir Douglas was the chairman.

“It was the only finance company I considered worthy of investing in. I’m not a fool, I know that many of those companies are risky.”

But while finance companies carried risk “names like Douglas Graham and Bill Jeffries . . . and so on, they are beyond reproach,” Wah said.

“If I can’t trust Sir Douglas Graham, then who would I trust?”

“What justice there is will be in the discrediting of those reputable people,” Wah said.

The trial ran before Justice Robert Dobson from October 18 last year to February 2.

The Crown alleged the men had signed off on investment documents, seeking money from the public, and related advertising material which failed to disclose the rapidly deteriorating financial position of Lombard Finance.

As a result, investors were not fully informed when they decided to put the money with Lombard Finance. The documents understated the value of Lombard Finance’s loan book, the troubled state of its lending and its dwindling cashflows.

Lombard Finance had also failed to adhere to its lending policies, resulting in investors being exposed to much greater risk than they had been led to believe, the Crown alleged.

Defence lawyers said there was no allegation of any deliberate attempt to mislead investors by the accused.

They told the court during the trial that the Crown’s case was a “post mortem” of a failed company caught up in the “tsunami” at the start of the global financial crisis, which engulfed the company over 101 days.