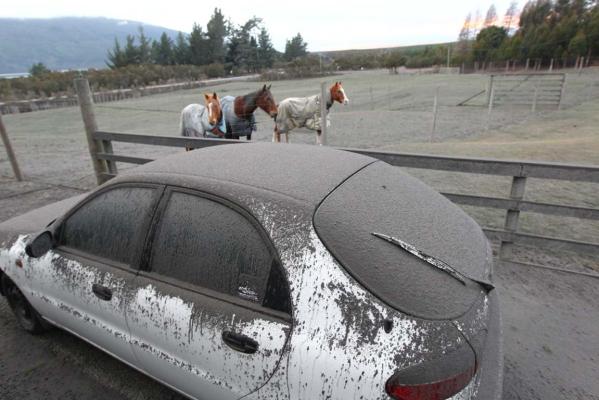 (Stuff.co.nz) LATEST: Volcanic activity at Mt Tongariro could continue for weeks, months or even years after Tongariro rumbled to life after being dormant for 100 years last night.

Although this comes after weeks of increased geothermal activity, last night’s eruption was a total surprise, so “we have to expect the unexpected”, GNS volcanologist Michael Rosenberg said.

The eruption threw rocks and spewed ash from the Te Mari craters, near Ketetahi hot springs, on the northern side of the mountain, GNS Science said.

A trucker, Bryn Rodda, said he saw part of the eruption.

I could see this big cloud, it looked like a fist basically, at an angle across the sky…and at about the wrist section of the fist there was an orange ball of flash that I saw, that was all I could see,” he told Radio New Zealand.

Threats have been issues for the Central North Island, with Civil Defence saying volcanic activity could pose a threat to Waikato, Hawke’s Bay, Gisborne, Manawatu-Whanganui, Bay of Plenty and Taranaki.

People living in those areas were advised to stay indoors with all the windows and doors closed and listen to the radio for updated emergency information and instructions.

This comes after a smaller eruption on White Island which happened yesterday.

It was the first eruption to occur on the mountain in more than 100 years, but if past trends are anything to go by, it could be the first of many more to follow, Rosenberg said.

Eruptions occurred intermittently from 1855 through to 1897, and it could not be ruled out that this was the start of a prolonged period of activity in the area, Rosenberg said.

“We have to expect the unexpected. We really can’t predict what this will lead to,” Rosenberg said.

“This has taken us by surprise. It’s gone from some little earthquakes that seemed to be tailing off, then all of a sudden this has gone boom.

“We really didn’t expect that there would be an eruption apparently out of nowhere.”

Teams from GNS would be assessing the volcano by air today and would be gathering samples of ash and rock. If they do not contain magma, then it is indicative that magma has not broken the surface, and may soon do so, Rosenberg said.

Prime Minister John Key is being updated on the eruption by Civil Defence and other Government sources.

He described the volcanic activity as moderate but said Tongariro would continue to be closely monitored.

If the situation required evacuations or an emergency response, Civil Defence would take responsibility of all emergency services.

“At this stage it is very much monitoring,” he told TV3’s Firstline programme.

The Desert Road section of State Highway 1, northeast of the mountain, and State Highway 46, to the north, had been closed due to the ash.

Motorists were being advised to avoid travel in the area. The road closures would be reassessed at daylight.

Light ash had been reported as falling on SH1 and SH46 and as far as SH5, near Te Haroto and onto Napier city.

An incident management centre had been set up at Whakapapa DOC visitor centre, and local council, police and Department of Conservation were meeting in Taupo this morning.

There had been no further volcanic activity reported since last night.

Civil Defence has not activated the National Crises Management Centre.

Inspector Ian Harris, of police central communications, said search and rescue teams would be sent up the mountain at dawn to check that no one had been stranded in huts.

There had been no reports of injuries or damage because of the eruption and no evacuation notices had been issued, he said.

However, GNS Science duty volcanologist Michael Rosenberg said some people in the Lake Rotoaira area had self-evacuated following the eruption.

There had been reports of “red hot rocks being thrown out of the crater”, several loud explosions and lightning when the eruption occurred and ash had fallen 5cm deep on SH46, he said.

The eruption had been “really unexpected”.

“You can measure and monitor but sometimes mother nature will do her own thing.”

Hawke’s Bay airport was closed until further notice, according to tweet from MP Craig Foss.

“The ash cloud is obviously stretching from the moutain out towards the east, so by about 9 o’clock this morning we expect that plume to cover probably Gisborne south through Hawke’s Bay, perhaps into the northern Wairarapa.

“So air travel into those areas, namely Gisborne, Hawke’s Bay aerodrome, and of course Taupo aerodrome will probably be affected by the ash,” he told Radio New Zealand.

Airlines would need to decide whether they would continue flying in and out of that area, Lechner said.

“It’s up to them to stay clear of the ash. If they can find a clear way through that’s fine.”

Flights overhead, such as from Auckland to Wellington, would not be affected. Those flights were usually at about 30,000 to 35,000 feet while the ash plume was about 20,000 feet, Lechner said.

If the weather patterns continue, the ash could be pushed out to sea by about 6pm tonight, Lechner said.

“As long as there are no further eruptions, that’s a good thing.”

There were five reported eruptions from the Te Mari craters between 1855 and 1897 but they had been dormant until now, the GeoNet website said.