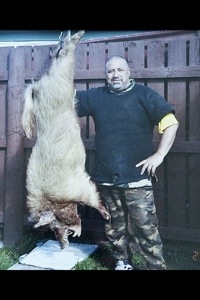 (Mike Watson, stuff.co.nz) Two boys kept an agonising eight-hour vigil beside their grandfather’s body after he collapsed and died while hunting in the Ureweras.

When police and rescuers arrived, Mikaere led them back into the dense bush to find the body.

“I cried and cried,” Mikaere said yesterday of Inia Kiel’s death. “I was just hoping there would be a miracle and he would wake up again, but he didn’t.”

The boys, from Te Teko, near Whakatane, and their koro, 52, from Rotorua, were deer hunting on Saturday morning near Ruatahuna in the heart of Te Urewera National Park when Mr Kiel collapsed from a heart attack as he was driving a quad bike up a steep-sided ridge.

The bike lurched forward, knocking Mikaere to the ground, as Rico grabbed the controls to stop it from toppling over the edge of the track.

“He had been telling us to be quiet so not to scare the deer, and then he started coughing really hard just before he collapsed,” Mikaere said.

“I wanted to help him. He could hear me but he couldn’t talk to me.”

The boys dragged him over on his side so he wouldn’t swallow his tongue. As they turned him, Mr Kiel closed his eyes.

The boys sat distraught beside him for eight hours, yelling for help, and with only a few snacks to eat.

As it began raining, and darkness approached, they covered Mr Kiel with spare clothes. They could see vehicle headlights on the road below and waved their hi-vis jackets from the summit, but nobody saw them.

By late afternoon, with heavy rain starting to pelt down and the temperature dropping, they decided to go for help.

“He had always told us not to separate if we got lost, and always try and get back home before it got dark,” Mikaere said.

So, armed with their grandfather’s rifle and knife, and with the bush skills he had taught them, they set off down the steep track with only a torch to guide them through dense bush.

“Koro had taught us to look for landmarks and footprints on the track so we could find our way out if we were lost. I think we went off the track a bit, because we didn’t come out where we had gone in during the morning.

“It was like a maze, with tracks going everywhere. We were lucky we came out where there were people.”

After 2 hours, with the torch battery slowly going flat, they came to a house about two kilometres from Ruatahuna. They were taken to their grandmother’s house, where they told her what had happened.

Family members, including Mr Kiel’s brother-in-law George Cairns, police and rescue volunteers arrived at the house about 8pm. A party of six set off with Mikaere at 11pm and found the body at 1am.

After a karakia, Mr Cairns and Mikaere then headed back to Ruatahuna, leaving three LandSAR volunteers with the body overnight.

It was brought back to Ruatahuna on Sunday afternoon.

Mr Cairns said the whanau were in awe of the boys’ temperament during an emotional 24 hours.

“It’s unbelievable how they managed to stay calm while they sat with the body and then decided to walk out and raise the alarm.

“Inia taught them the bush skills which they used to survive and then help searchers find his body.

“It’s tragic what happened to Inia, but at the same time he would be proud, like we all are, of the decisions they made themselves at a crucial time.”

Mikaere said he would really miss his koro, who had taught him everything about hunting. He had shot his first deer with his grandfather in the roar this year.

“He taught us how to be safe with a rifle, and lots of things about stalking deer.”

“Boys who live out near the Ureweras are taught how to survive in the bush. It comes naturally to them.”