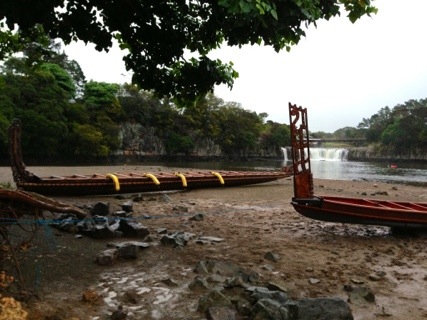 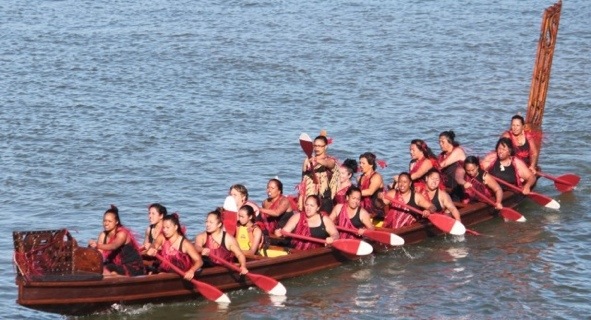 Akinaakina! Hii! Akinaakina! Hii! Such was the powerful call from the Kaihautu (leader) of Te Arawa waka Paora Te Hurihanganui, as he and the crew made its way fromHaruru Falls toward the shores of Waitangi.

Months earlier, a callout was made to assemble a crew to paddle Te Arawa waka at Waitangi after a 23-year absence. Over 80 people would put their hands up, attending training and fitness sessions and marae noho before two crews were finally formed.

Our training was part fitness, part wairua tapu. Many of us could feel the spirit of uncle Putu Mihaka, a man who symbolised our Arawa spirit, yearning and love of waka. Uncle Putu, Mita Mohi and Laurie Duranddid much to revitalise waka traditions in Rotorua, and it was under the guidance of Laurie, Paora Te Hurihanganui and Pererika Makiha that we would travel.

As I mentioned, Te Arawa waka itself had not been back to Waitangi since the 1990 Celebrations of New Zealand. Carved by local tohunga whakairo Lyonel Grant, Te Arawa is shaped as a war canoe and sits quietly down at the Rotorua Lakefront.

We are told that the original Te Arawa waka was a twin hulled voyaging craft referred commonly nowadays as a Waka Hourua, whereas our current tupuna waka is a war canoe, made specifically to join the largest waka gathering seen since 1940.

During the 100-year signing of the Treaty o Waitangi in 1940, a beautiful waka named Ngatokimatawhaorua was carved. Named after the original waka of Kupe, Nga Toki was the largest waka built and could carry 150 warriors, with 80 paddlers.

Original film footage showed the cutting of the 600-year-old tree which was then crafted and paddled by a crew that was both wahine and tane.

Nga Toki sat under its korowai shelter for 34 years before tohunga waka Hekenukumai Puhipi (Hector Busby) once more picked up the hoe and ensured that the breath of life flowed through the huge waka. If you get the chance to visit the Treaty Grounds, stop by to say kia ora to both Ngatokimatawhaorua and Mataatua Puhi. Also keep an eye out for an amazing film on the waka, as it includes footage on Te Hono ki Aotearoa which was sent to Leiden, Holland and the waka crew who joined the Queens Diamond Jubilee flotilla in 2011 (as an interesting side note, Guide Maggie Papakura took a crew to the Thames 100 years ago, a piece of valuable history I would love to learn more about).

Before too long, we were ready to travel toward Te Hiku o te Ika, the tail of the fish ofMaui. With a karakia from Koro Te Poroa Malcolm, we left the lakefront and made our way to Haruru Falls Waitangi, where all the waka crews would stay at a placed known as tent city. We were welcomed by theNorthern Kaihoe and got straight into our drills.

Our crew had a good mix of age, experience and vitality. There was always someone to talk to, lots of singing and linking of whakapapa. It was amazing to share an exciting journey which was both physically demanding and culturally fulfilling.

On the morning of Waitangi Day, we rose to welcome the morning star and set about preparing our waka under the slow crawling sun. The waka Tieke would be crewed by a wahine only was both stunning and powerful. Our waka Te Arawa moved like a jet fighter behind the other waka, with both balance, power and speed being essential.

As we joined alongside the flotilla, our training kicked in as we felt the pull of Tangaroa. We had trained on land and on the lakes and had been warned about the power of the ocean. With Paora as ourKaihautu (leader) and Pererika as Kaiuringi (steerer), we all had to lock in and row in unison and in time.

As we passed under the Waitangi bridge, a karanga sounded to both our waka which sent shivers down our spines and emotions well up inside as we made the journey to the beach, joining over 200 other kaihoe. There was a huge series of haka from the northern kaihoe before we unleashed our haka Tamatekapua and then Te Arawa e. The crowds from the shore applauded as we then went into a mass paddle haka known as Nga Whakamatautau. These are moments that many of us will hold dear for the rest of our lives.

With our muscles burning, we then made our way back to support Nga Toki and then joined all the crews for a final hakari at TentCity. Our crew of Te Arawa sang our thanks to our hosts, as did the crew of Mataatua and farewelled new friends made. The visiting Ainu people, who are the indigenous iwi of Japan, embraced members of our crew, and we all boarded our own transporthome.

For me, the real challenge lay with my nephew Waata. As a young Te Arawa rangatahi, his mum Judith and I wanted to make sure he learnt as much as possible about our iwi traditions. It was a demanding journey for him and our entire whanau was proud to know what he had gone through and that he had made some good friends along the way. Kia kaha e te kakano a Rangiatea.

So, much love to everyone who made our journey possible. We all hope that we made our iwi, hapu, whanau and city proud, as we felt our ancestors with every stroke, with every note, with every chant. Thank you Te Arawa Lakes Trust, Te Wananga o Aotearoa, Rotorua Youth Centre, Te Papatakaro o Te Arawa, Te Waiariki Purea Trust the Mihaka and Mohi Wh?nau and last but not least, all of our sponsors our kaumatua, koroua, kuia and wh?nau who travelled with us to Waitangi and at home.We all hope to keep the spirit of Te Arawa waka alive over the years to come and look forward to Te Matatini, Matariki and Waitangi Day 2014.

And if you ever find yourself down at the lakefront, please call in to say kia ora to our waka. Te Arawa loves waiata, admires haka and always loves a visit from whanau. Te Arawa waka, engunguru nei! Au, au, aue ha, hii! 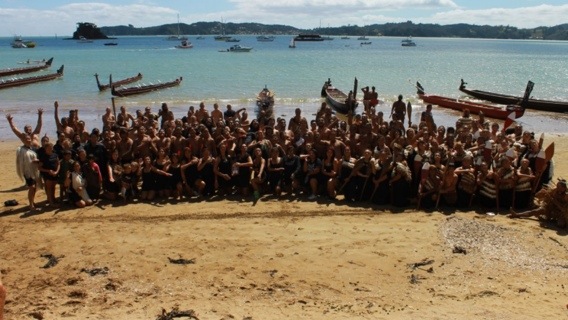