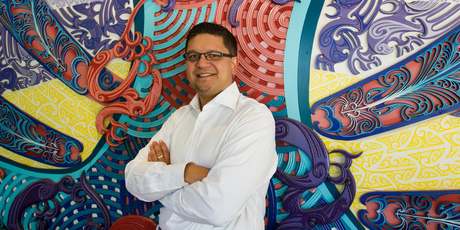 Broadcaster Shane Taurima is considering a move into politics and has spoken to the Labour Party about running in the Ikaroa Rawhiti byelection next month.

Mr Taurima confirmed he had been approached about standing and was considering it, but was yet to make up his mind.

“It is a huge decision.” He is expected to raise it with his bosses at TVNZ this week.

He was promoted this year to head TVNZ’s Maori & Pacific Programming after working as a journalist and presenter on programmes including Te Karere, Marae and Q+A.

If he goes ahead, he will be one of at least three to try to secure Labour’s nomination for the seat for the June 29 byelection, which is required after the death of Parekura Horomia.

Yesterday, Meka Whaitiri confirmed she will seek Labour’s selection and Hastings District Councillor Henare O’Keefe is also likely to run, although he is yet to officially announce it.

Mr Taurima has the whakapapa for the area – he is Rongomaiwahine, Ngati Kahungungu and Ngati Porou.

He grew up in Napier and Gisborne, but has spent most of his career in Auckland and Wellington where he worked in the Press Gallery for more than 12 years.

He also has some political pedigree – his great-uncle Tiaki Omana unseated Ngati Porou’s Sir Apirana Ngata in the Eastern Maori seat in 1943 and his family are involved in the Ratana Church, a Labour ally.

The Maori Party also has at least two people interested – artist and carver Mark Kopua and its 2011 candidate Na Raihania. The Mana Party is also contesting the seat.

Nominations for Labour close on May 22. Mr O’Keefe is understood to be the favourite of many in the party. But Ms Whaitiri, the chief executive of Ngati Kahungunu and who was close to Mr Horomia, is also popular.