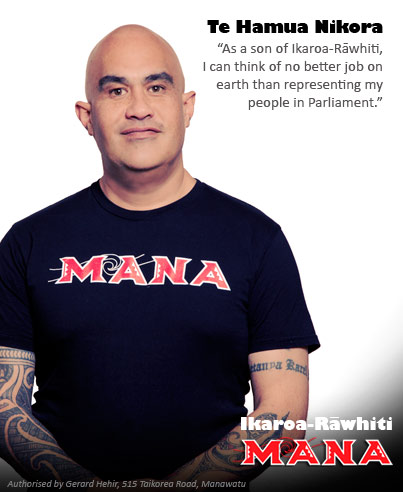 It’s official, the Mana Movement has confirmed that they have formally selected Te Hamua Nikora to stand for the 2013 Ikaroa-Rawhiti by-election.

The announcement follows three selection hui held within the electorate this week to determine if it would be Leon Hawea or Te Hamua Nikora.

There was intense interest in who Mana members would select and in the end it was Te Hamua who was picked reflecting a fresh approach to representation in Parliament.

Te Hamua’s strength lays in his work at the coal face. He understands the community and the challenges they face. With that said his own challenge will be proving to the electorate that the “funny fella” has the skills to represent his people at a national level.

From our analysis Te Hamua ticks all the right boxes, he’s affable, approachable, smart and brings something new to the table, something that just might invigorate an electorate which sees its highest enrolments taking out the 18-24 year old age bracket.

If Te Hamua can capture these voters, the seat will be his.