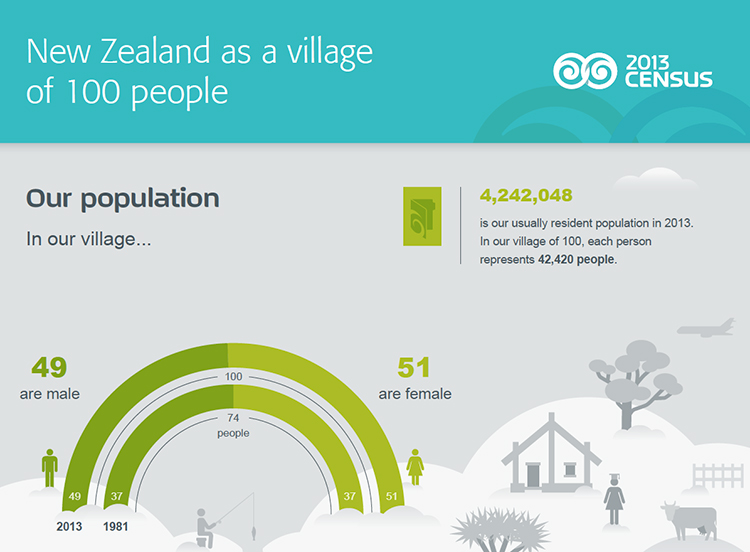 Data is a taonga.

When we hear whakapapa recited, it links the people to the land across multiple dimensions. The same can be said when a waka is carved, in that the calculations required for every little step need to be fully thought-through and executed with exact precision.

Many of us would watch our kuia and koroua weave tukutuku panels and korowai with an intimate eye to detail, where every nuance is laboured and when complete, a design is left that simply takes your breath away.

The same can be said that statistics are a taonga as well.

At a recent Statistics NZ hui in Wellington, the esteemed academic Manuka Henare stated that the Maori population doubles every 30 years, which means that by 2040 there could be as many as 1 million people who share whakapapa. That figure is incredible.

So in an effort to understand how to better interpret the figures, we here at TangataWhenua.com would like to share with you some of the amazing tools designed by Statistics New Zealand that can help you think about, gather, organise, connect, and make sense of information for your whanau, hapu, marae, land trust, kohanga, kura, roopu or iwi. 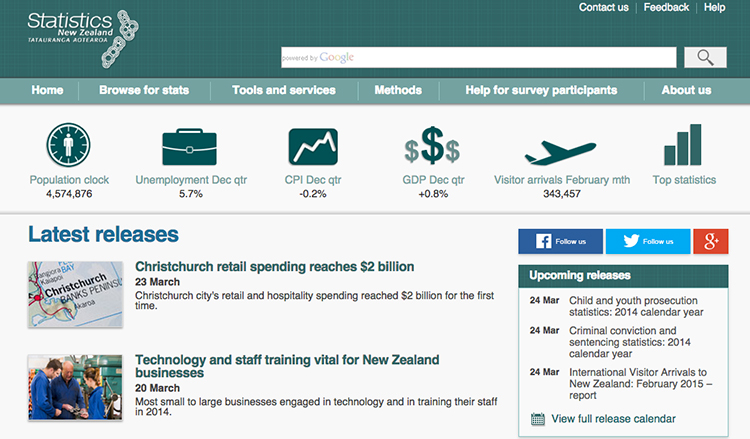 One click and you’ll find yourself looking at the latest information, news releases and online tools. Data is constantly being received from all across the country which is then turned into useful reports, such as retail spending, population numbers, food prices, visitor numbers.

This report, and many others, can be found on the Releases section.

If you scroll down to the bottom right of the homepage under Quick links, you can access Maori Statistics.  This section has an amazing array of online resources for whanau to access and utilise. There is a thoughtful korero on how to think about information by and for Maori, latest news, interest areas and specific links to Census 2013, in particular Iwi Profiles.

As examples, here are two sets of figures for my hapu Ngati Whakaue me Ngati Pikiao:

For people aged 15 years and over affiliating with Ngati Whakaue and living in New Zealand on 5 March 2013:

For people aged 15 years and over affiliating with Ngati Pikiao and living in New Zealand on 5 March 2013:

By having access to these statistics, our whanau can start to see the broader picture when it comes to our hapu/iwi and start planning accordingly.

For whanau interested in the level of te reo Maori proficiency and te reo Maori speakers, the section from Te Kupenga 2013 will be of interest:

Nearly 3 out of 5 (58 percent) Maori women had some te reo Maori speaking skills. This included 12 percent who could speak Maori very well or well, and 46 percent who spoke fairly well or not very well. For Maori men these figures were 9 percent and 42 percent, respectively. 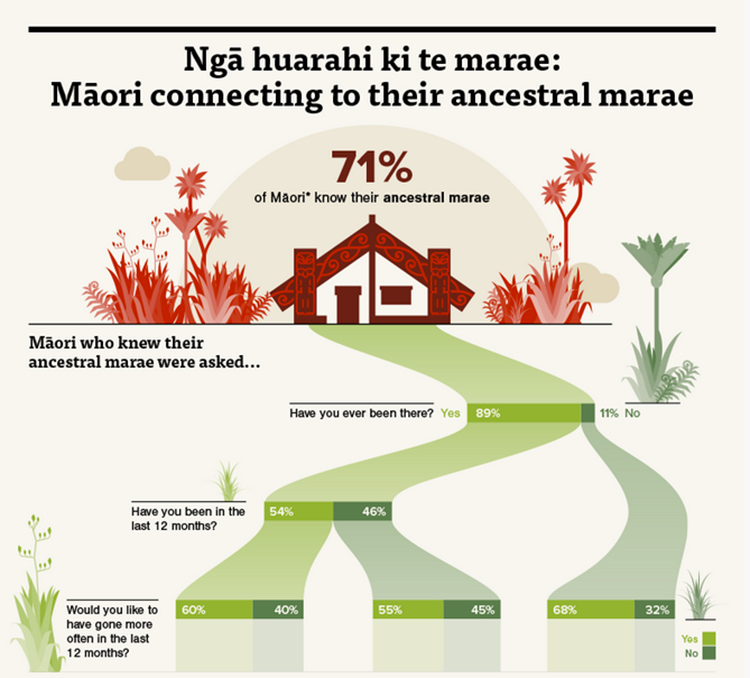 Te Kupenga itself was the first survey to measure Maori cultural well-being, starting from the key principle of connecting. Statistics NZ recognised that culture comes from the importance of cultural knowledge, values, and behaviours that allow individuals to connect with each other and their surrounding environments, and the resulting sense of self and belonging. Starting from this principle, Te Kupenga focused on four areas of cultural well-being:

The digital tool we had the biggest tutu with was He Arotahi Tatauranga.

He Arotahi Tatauranga is described as tool that has many entry points and many pathways where whanau can ask questions, navigate and find a range of answers for their information needs.

During a 2-hour session, we learned about the framework and structure of He Arotahi Tatauranga, reading through the Guide and determining the best entry point to start our journey. From there, we selected the topic of interest (for example, Waahi Tapu) and the dimension (Environmental Sustainability) and cross-referenced both to find a connecting kaupapa (Waahi Tapu need to be sustained for future generations). These simple measures for Maori could now be used as reference points for larger conversations, such as developing Environmental Management Plans or for project groups keen to design a larger framework for their data-capture within a Marae or Hapu context.

There was so much to learn about the tools, teachings and training provided by Statistics New Zealand that we at TangataWhenua.com will be spending the next 3 months sharing information, korero, tips and contact details relevant to this subject.

I would like to send a big mihi to Karen Coutts and Bob Hill – kei te mihi aroha ki a korua rangatira – and also many thanks to John, Wes, Linda, Pedro and all the team at Statistics New Zealand for all of your hard work and tireless efforts. We very much look forward to sharing more informed and exciting information. Kei te mihi, kei te mihi.

Huakina te papakiri, ka kite te taikaka.
Open the bark of the tree so we can see the heartwood.

Broaden our view of information so we can better understand Maori well-being and the ways to achieve it.

1 thought on “How can data and statistics help your whanau, hapu, iwi? #MaoriBigData”